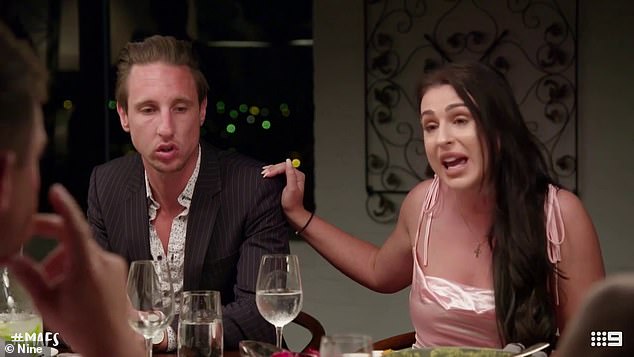 This week raised plenty of issues for the MAFS couples, with some of the strongest marriages on the verge of leaving the experiment.

The sixth week of Married At First Sight definitely provided a lot more cause for concern, with most couples finding it difficult to progress their relationships. Let’s get into all the action from week 6 of MAFS!

In this week’s commitment ceremony, once strong relationships crumbled including Mishel and Steve and their showdown on the couch. From the get go, Steve revealed he listened to his gut feeling and wrote leave, meaning Mishel’s decision would decide their fate. Despite the show’s editing making it look like Mishel would choose to leave, reassurance from her daughter to break her pattern of leaving relationships saw Mishel stay. In hindsight, this was a smart decision as they have improved significantly over the rest of this week. The only other contestant to write leave this week was Jonethen. After Connie wrote leave last week, Jonnie still felt defeated and like he was “walking on egg shells.” Despite the rest of the couples writing stay, all bar Seb and Lizzie’s chat with the experts didn’t come without some form of controversy.

Michael revealed he has stopped drinking in a bid to show his commitment to Stacey. So much so, Stacey dropped the L-bomb hesitantly and the couple revealed they already have plans to move in together. The rest of the group was just as concerned as I was, confused as to how they have completely forgotten about Michael’s cheating scandal a week prior. While discussing this couple, I found them completely disrespectful when KC and Drew were discussing their teddy saga on the couch. Thankfully, expert Mel Schilling confronted the couple and said their laughter was not appropriate.

Josh admitted he is worried that after a better week with Connie, they may just be friends. Cathy was left speechless and held back tears, thinking they had turned a corner. Ivan and Aleks were applauded by fans for sticking up for themselves and not revealing details about their intimacy. Expert Trisha Stratford put the couple under the pump, but Aleks and Ivan continued to refuse the discussion. While I see where the couple is coming from, it is hard as they have signed up for a show that has three experts overseeing all aspects of their relationships. The experts stood up for themselves, saying they do not care to hear “gory details” but are simply doing their job.

The second episode this week showcased the first of the homestays, with the grooms taking their brides to live with them and see how they fare. Unfortunately for Josh and Cathy, they struggled to make it to Josh’s homestay after not speaking the night after the commitment ceremony. Despite Cathy deciding to go with Josh to Newcastle and the couple deciding to not discuss their troubled relationship status with Josh’s family, Josh threw her under the bus for the second time and Cathy was not happy. This created Josh’s Mum VS Cathy 2.0 and forced a bigger divide between them. During the couple’s chat on the beach, Josh said that “maybe this why are just friends and we not moving further.” After hearing this, Cathy got up and left. She admitted she is afraid the relationship is failing and always feel she is doing wrong.

Despite Michael’s efforts to prove his a changed man, he really did the opposite during his homestay. Clearly living the bachelor lifestyle, he offered Stacey bikinis of ‘friends’ that has been left at his. Stacey was not impressed and refused to wear as they “could have chlamydia in them.” Not a smart move by him at all. Seb and Lizzie had their first fight this week, after Seb made insensitive comment’s regarding her eating habits, but worked through the issue. Connie put her best foot forward in an attempt to give hope back to Jonnie. Despite Connie’s best efforts, Jonnie still see’s them just being friends.

Ivan pulled out all the stops for Aleks during their homestay, but didn’t quite hit the mark Aleks was hoping for. Aleks opened up to Ivan, admitting she is missing family, can’t see herself moving to Sydney, is questioning their romantic connection and their is parts of their relationship they lack and miss. Ivan tried to slowly digest the information but Aleks was adamant she doesn’t see Ivan as a future soulmate or partner.

Connie impressed Jonnie after showing a different side to her during time with his friends. Connie admitted her feelings are only growing and while Jonnie was impressed, he is worried he has now given her the wrong idea and false hope. KC and Drew were having a great homestay until KC threw Drew’s toys in the bin. That’s right, BIN! I don’t know why she thought that was okay but I found it extremely rude. She shouldn’t try and change him just because she finds his teddy’s “weird.” This raised red flags for Drew and admitted he doesn’t see them together long-term. Another successful MAFS marriage!

Mishel and Steve have gone from bad to good to bad back to good all in the space of this episode. After Steve brought up the situation from earlier in the week during lunch with friends, it bought them back to square one. Mishel continued to feel attacked and is still seeking validation of her feelings. She was extremely forward to his friends and left the lunch ready to go home. Just when I thought it was all done for good, they apologised and moved on. It really beats me how they are still together.

Now for the dinner party. Wow, where do I start. This was easily the most dramatic dinner party of the season thus far. The main topic of conversation throughout this dinner party was Aleks complete change of heart about Ivan and her involvement in a alleged cheating scandal. It was also made evident that Ivan had pitched a plan for both Josh and Michael to hold Aleks accountable for the rumours.

Again, I really don’t know where to start. Aleks admitted to some of the girls how she thinks they’re not compatible. Previewed earlier in the episode, Michael delivered in his bid to support Ivan and make Aleks accountable. For most of the party, Michael along with Josh were the most vocal in supporting Ivan. Michael started off by questioning Aleks’ honesty regarding intimacy, but later in the night began to discuss with the group how he saw Aleks’ return from a date with a ‘guy who drives a Lamborghini. Both Mishel and Connie confirmed Aleks has had contact with the man, but Aleks denied she had cheated or was dating with him. Michael kept going and in the end, the obvious lack of effort from Ivan during the dinner party became apparent. Josh called him out, telling Ivan to “grow some balls.” Michael and Josh admitted they felt used by Ivan and believe he has got them to confront Aleks so he can look like the good guy by sticking up for her.

The way this was edited made it extremely difficult to interpret what is right or wrong in this situation and has left me unable to make an honest judgement or opinion. I finished watching it, re-watched it to try and make sense of what happened but I couldn’t. All I can do is wait for Sunday night and hope more is uncovered.

In between the madness that was this drama, it was also extremely noticeable the awkwardness between Josh and Cathy. Unfortunately, it seems all over for this couple that was once the clear ‘power couple’ of the season. Thankfully, there were a few positives to take out of this party. The success of Seb and Lizzie was evident, highlighting what a good couple they have proven to be. It was also promising to see Mishel and Steve extremely happy, complimenting each other and enjoying the night.

This Week’s Hot And Not Couple

Each week, I will pick which couple is flying high and the couple that has had the most trouble.

By a country mile, this couple has been the strongest of the bunch. Despite a hiccup earlier in the week, they seem to have the most promise out of all the couples. I guess that is not really saying much, look at the rest of the couples.

Not: Josh and Cathy

This was a toss up between Josh and Cathy and Aleks and Ivan, but Josh and Cathy have been rocky since the end of last week. I will be tuning in to see how they fare on Sunday night, but it does not look good for this couple in particular.

MAFS promos have teased the end of love on Sunday night, and that this is the commitment ceremony that will ‘break your heart’. I can’t wait for my heart to be potentially broken on Sunday night!